The train disruption on Saturday did not stop the proceedings of MARUAH’s “ASEAN Matters in Singapore” Workshop series. The event provided an overview of the Association of Southeast Asian Nations (ASEAN) and the various human rights related developments within the region. Braema Mathi, MARUAH President, brought participants through the various declarations and action plans on human rights issues in ASEAN.

This was followed up with an interactive activity. All participants were invited to take on different personas – for example, a 24 year old refugee, a retrenched father of three, or a son of a diplomat to name a few. Participants lined up on a starting line and a series of rights was read out. Each character determined if he or she could attain that right, and moved forward or backwards accordingly. Participants learned that despite playing the same persona, two individuals perceived their rights differently. Furthermore, this activity also highlighted the disparity in rights among different communities.

Lee Sze Yong, MARUAH’s secretary, subsequently introduced Human Rights in general, including the Universal Declaration of Human Rights (UDHR) and the United Nations (UN). This presentation tied-in with the earlier interactive activity, and was aimed at strengthening the participants’ understanding of human rights, and why they matter.

Michael Switow, from ONE (Singapore), shared from the floor the Optional Protocol to the International Covenant on Economic, Social and Cultural Rights (OP-ICESCR). Similar to other Optional Protocols, the OP-ICESCR enables complaints to be made to the UN if local remedies have been exhausted. The OP-ICESCR will enter into force when 10 countries ratify it.

The next segment introduced various thematic issues, including migrant worker rights and economic rights. John Gee, Immediate Past President of Transient Workers Count Too (TWC2) shared migrant-related issues in Singapore from the floor. He shared that many foreign workers still did not enjoy their right to rest/leisure time and also cited examples of their debt bondage.

The ASEAN Declaration on the Protection and Promotion of the Rights of Migrant Workers was highlighted and how it was found wanting in meeting the needs of migrant workers. Regional challenges included the need to deal with climate change refugees as well as transborder movement of people. 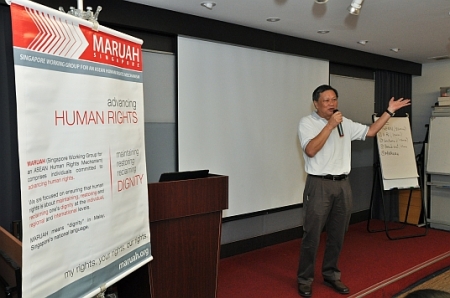 This included a segment on land rights by Leong Sze Hian, MARUAH’s treasurer. On homelessness, he pointed out that waiting times for public rental flats were shortened, but that occurred because of an increase in rental rates. He also pointed out that HDB flats are one of the most expensive public housing in the world. He highlighted that there were no statistics on how many homeless people there are in Singapore.

Additionally, many homeless people are unaware of where the shelters are. The homeless shelters have long waiting lists as well. So the pressing challenge is for the government to move from an economic pragmatic approach to a rights-based approach. (Read more here.) 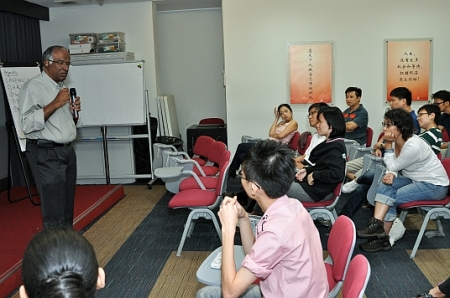 Another thematic issue presented was Corporate Social Responsibility (CSR), by Mr Thomas Thomas, Executive Director of Singapore Compact. He highlighted that many local companies remained unaware of CSR, or wrongly equated it with philanthropy. “CSR is not about how you spend your money; it’s about how you make your money”, he remarked.

He then introduced the United Nations Global Compact’s ten principles, which besides human rights, also included areas like environment and anti-corruption. Mr Thomas also cited the ISO 26000 standard and its seven core subjects of social responsibility.

At the ASEAN level, the 2015 Roadmap notes the importance of CSR to ensure equitable development, as CSR should help create wealth for the community. He also mentioned the existence of an ASEAN CSR Network, which is an encouraging development. However, the challenge remains to change the mindset towards CSR. Additionally, it remains a challenge to get companies to report using the Global Reporting Initiative (GRI), which helps assess the sustainability of an organisation – economic, environmental, social and governance performance; the four key areas of sustainability.

The next thematic presentation was on child rights in Singapore, presented by Dilpreet Kaur, executive officer of MARUAH. The presentation introduced the Convention of the Rights of the Child (CRC), which Singapore ratified in 1995. Three reports have since been submitted to the CRC committee. Singapore has also ratified one of the two optional protocols; the Optional Protocol to CRC on the rights of the child on the involvement of children in armed conflict in 2009. However, it still holds on to reservations and declarations despite strong recommendations in concluding observations of the CRC committee.

Child rights issues in Singapore include what is the definition of a child with regards to age of criminality; children aged 16-18 years old are excluded from the Children and Young Person’s Act (CYPA) and healthcare and educational subsidies are only applicable to Singaporeans.

In 2004, the law was amended to allow children born overseas to Singaporean mothers to apply for citizenship; those born earlier have no access to this right. Also, the Compulsory Education Act excludes children with disabilities. So a rights-based approach, one that is based on universal, inalienable, indivisible, interdependent and equal and non-discriminatory rights is missing in the Singapore discourse.

Last but not least, we had a thematic presentation on the Southeast Asia Women’s Caucus on ASEAN (Women’s Caucus) by Nadzirah Samsudin from the Association of Women for Action and Research (AWARE). The group consists of 52 organisations from all ten ASEAN member countries as well as Timor Leste.

The Women’s Caucus focuses on several key issues, namely migration, violence against women, economic rights, political participation, discrimination in laws, policies and practices, as well as Sexual Orientation and Gender Identity (SOGI) issues by invoking principles under the Convention on the Elimination of All Forms of Discrimination against Women (CEDAW).

Challenges include the lack of commitment by ASEAN on the prioritisation of women’s rights, insitutionalisation of civil society organisation participation, creating space for Women’s Caucus to meet with AICHR/ACWC/ASEAN Secretariat. Locally, there are perceptions of the limited impact of ASEAN to women on the ground level, and lack of ownership of Women’s Caucus.

The workshop concluded with an invitation for interested participants to join as volunteers. This series will continue with future updates on ASEAN matters. So keep in the loop by watching this space or joining our mailing list – email us at maruahsg@gmail.com.

This entry was posted on Saturday, December 24th, 2011 at 11:11 am and is filed under Event reports. You can follow any responses to this entry through the RSS 2.0 feed. You can leave a response, or trackback from your own site.