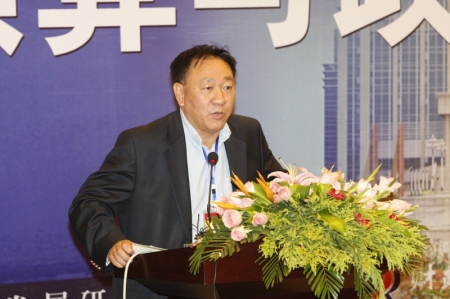 MARUAH: Good afternoon Mr Li. Welcome to Singapore. Thank you for agreeing to this interview at such short notice. Can you tell us a little about yourself?

LI FAN: My background is in Political Science – I have two Masters degrees, one from Beijing Normal University and one from Ohio State University. I returned to China in 1989 and things were quite bad at that time so I worked for the government initially. In 1993, I moved from the government to establish a NGO – a think tank – the World and China Institute (www.world-china.org). We aimed to help local governments with elections. We helped organise the first local township election in 1998 in Sichuan in Buyun township. Since then, I have been very interested in election work. After this, we helped local people and local governments across China conduct village elections. Our first election observation project was in China was in 2002 after observing the Cambodian election. We observed a village election in Hubei. We had a three person team with a lawyer, a reporter and myself (an academic). When we arrived in town, we informed the local government that we had “come to observe the elections, whether we were welcome or not”. We did not call ahead. If we did, we knew would not be welcomed. Since we were there, they had no choice and could not stop us from monitoring the local election.

MARUAH: How did you get involved in Elections Monitoring?

LI FAN: I joined 3 international election observation teams beginning with Cambodia in 2001, followed by teams in Bangladesh and Nigeria. We then sent observation teams to watch village and community elections in China. In 2006, when the local people’s congress elections were held, we sent some people to observe these. This year the five year cycle for the local people’s congress elections has come up and we have tried to establish our monitoring system to cover as much as we can of China.

MARUAH: In China, my understanding is that all elections are local. What has been your experience with observing these elections in the context of China?

LI FAN: We compiled our experiences and have come up with a manual this year. Last year, we went to Colombia to visit an NGO (MOE-Monitoring of the Election) that specialises in monitoring of elections. They cover the whole country. They had a big training program and were well funded from the UN and a number of other countries with a lot of volunteers. They produced a manual in Spanish and we used that and other resources to come up with an election monitoring manual in Chinese.

Sometimes, we will write to the local governments to let them know that we are coming to monitor the election. It is important to note that elections in China are different because the candidates in Chinese elections are all appointed by the government. There are no political parties, but many independent candidates attempt to run in the elections. They often ask for help from NGOs like us but we do not let the local government know that we are assisting independent candidates in case we get arrested!

MARUAH: That is interesting! What are some of the positives that have come out of your experience in the local government elections?

MARUAH: Do you report on your election monitoring findings? How are your reports received by the authorities?

LI FAN: After the election, we write a report on the election procedures observed using international standards as the benchmark. We publish the report and send a copy to the different levels of government as well as to other interested parties including academics. The governements do not usually respond to our reports. The intellectuals often respond by saying that the election process needs to be improved. Even though there is no official response, we have observed that with every successive cycle of the Chinese local people’s election, there has been an improvement. It may be a small change but it is still an improvement. We then hold international conference to present the results of our findings and make recommendations – this often actually leads to improvements in the election laws at the central level.

MARUAH: What are some of the difficulties that you have faced in doing election monitoring in China?

LI FAN: The government has given us small problems. They do trace my phone calls and sometimes ask the local police to follow me. Sometimes, they come to my office to ask what we are doing. In general, however, we have had good relations with the central government in Beijing as we are keeping an eye on the local governments which they find difficult to do as there are five levels of government in China – Beijing, Province, City, County and Township. We are able to give accurate information to the central government which they use although they may not acknowledge it! They do not respond to us directly but they do follow our website closely.

MARUAH: I do not like to ask this question but who provides the funding for your group?

LI FAN: Our funding is international – from the US and EU. The Chinese government is not happy about this. I have asked them for funding as an alternative to sourcing from international agencies but they have refused to give me money, so we have no choice.

MARUAH: Is this your first trip to Singapore?

LI FAN: This is my third trip to Singapore. I had meeting with the East Asia Institute from NUS before. This is my first time as an election observer. I think this election will lead to a big change for Singapore. (laughs)

MARUAH: What have you done here so far?

LI FAN: Last night I was at the Singapore Democratic Party Rally. I was surprised as I never realised that the opposition was so strong and well organized. This afternoon, I was at the People’s Action Party Rally at Boat Quay and again I was impressed to see the Prime Minster out campaigning among the people. That would never happen in China!

MARUAH: What other observations have you made here?

The election displays here – posters and flags are very limited similar to what happens in Hong Kong and Japan. This is unlike what happens in Taiwan where posters and flags are everywhere. It is also unusual that there are no processions which are a common feature of elections elsewhere. I understand that they are banned here. China is likely to follow the Singapore model in the near future with similar limitations on displays and processions.

MARUAH: Is there a way of quantifying election monitoring?

LI FAN: We came up with a Chinese democracy index. This has four components – elections, government accountability, rule of law and civil rights. Singapore is strong in rule of law and has some civil rights (maybe not political rights but strong rights of association and freedom of religion) and is also relatively strong in government accountability. Overall, Singapore is about 20 years ahead of China in most of the parameters that we measure.

MARUAH: What about your experiences in other countries?

MARUAH: How important is election monitoring?

MARUAH: Thank you very much and do enjoy your stay in Singapore. We will be very interested in your reports! We will check your website for updates.

This entry was posted on Thursday, May 12th, 2011 at 10:48 pm and is filed under GE2011 election watch. You can follow any responses to this entry through the RSS 2.0 feed. You can leave a response, or trackback from your own site.